Would you believe me if I told you that after blogging for several years, I have never tried a Morphe palette?  The only Morphe product I’ve ever tried was a bronzer that was in my Ipsy bag, and it was okay.  Nothing special, but not bad for the price point.

I will say I’m NOT big on celebrity products, as all too often they’re about the hype and name, not the actual formulations.  I hadn’t ever heard of Morphe until Jaclyn Hill started raving about them.  Even then, I had heard of Jaclyn Hill, but knew nothing about her, as I wasn’t really into YouTube at the time.

Anywho, Morphe wasn’t available in any stores within driving distance, so I used my “celebrity product budget” for products I could buy in-store, thus giving the sales to actual people we knew and encountered regularly in person.  Then the Becca x Jaclyn Hill stuff came out, in-store.  I decided, what the heck, and took the bait.  The blush and highlighting palette was great, but the eyeshadow palette was horrible.  SO disappointing (read my initial thoughts here).

Fast forward to a few years later… I haven’t kept up with Jaclyn for a couple years now, recently found out she released her own new line of cosmetics, only to have a big SNAFU with the lipstick.  I also took a break from blogging regularly for family reasons, but we recently went to Ulta and saw the Morphe display.  Large beautiful palette collabs with several now-well-known YouTubers, and from Jaclyn herself.

Sorry, not gonna bite.  Not going to spend the money on a palette just because it has a specific name on it, especially when I haven’t ever tried the brand before.  So, I found a small, nine-shade palette to try, and if I liked it, I’d think about getting one of the others.  Sounds pretty reasonable, huh?

I chose the 9C Jewel Crew palette, which retails for $12.00.  Was it worth it?  Aang and naang- yes and no.  First off, I noticed in-store that the packaging was sturdier than I expected.  There are some online brands that look nice in pics, then I see actual products at discount stores like Ross, and it’s really cheap, flimsy packaging.  This was not the case with Morphe.  The palettes are substantially sturdy, with equally sturdy closures, and a mirrored lid.  They don’t feel at all flimsy.

I chose the 9C Jewel Crew because the shades are gorgeous with so many possibilities for creativity.  The description on the back of the box says “Mix and match these crazy-creamy, powerfully pigmented, beyond-blendable gilded eyeshadow anywhere you go.”  (Yes, it says “eyeshadow,” I know it should be plural, but that was them, not me…lol.  Anywho, they got their point across, so no biggie.)

When I swatched the shades, I noticed some are very good, others not so much.  Rock Out had great pigmentation, it was the best of them all.  Chocolate Diamond, Stone Fox, and Rich Girl were also decent.  Hidden Gem had good pigmentation, but also a bit of fallout due to the little flecks of shimmer.  Rose Quartz and Purple Reign were near impossible to get to show up on my skin; Fool’s Gold was nearly the same.  Most disappointing, though, was Flecks- it’s a beautiful rich brown in the pan, but barely showed up.

The shades I got to show up were quite blendable, with again, Rock Out being the best.  I don’t know if the others were equally blendable because I could hardly see them…lol.  I have medium-toned skin, so it may be that these shades just don’t work on my skin tone.  Some shades work better on lighter people, some on much darker people.

With my skin tone, if I’m looking for something similarly-priced, I prefer the Pixi eyeshadows – they pack a decent amount of pigment, are really silky, and highly blendable.  I’m going to pass this palette on to my friend, Baylea, as she has a different skin tone and the shades may be perfect for her.  🙂

If you’re interested in trying these shades out… I would stop by Ulta if you have one nearby so you can test them out before buying. 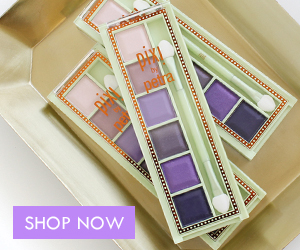