Happy Hump Day! Well, I guess it’s technically Thursday now.  But anywho, it’s the middle of the week, and I have to go to the dentist tomorrow.  Er… today.   Arrrgghhh…  At least I’ll smell good…lol!

I’ve loved perfumes and all things fragrance since I was a child.  I tend to have a “signature” scent at any given time, plus several others that I wear to change it up every now and then.  As I got older, I became somewhat of a fragrance “snob.”  Not in the way of only wearing high-end fragrances, but in the way that I don’t like to wear the same scent as everyone else.

Finally, Jerry suggested we go to Saks when we were on a trip, and get something exclusive to them.  Since we didn’t have a Saks anywhere near us, he reasoned it would be less likely others would copy me.  We found a new one that we both fell in love with, and it was only carried at Saks.  So, we refused to tell anyone what it was when asked, and I got away with wearing it for several years, no one being the wiser.  Then, the exclusive deal with Saks came to an end, and other retailers started carrying it.  As soon as Sephora got it, everyone was wearing Viktor & Rolf’s Flowerbomb.  Dangit!

I decided to heck with it on one of our Sephora trips, and bought two new fragrances, despite Jerry telling me I shouldn’t.  I figured, sure Sephora is mainstream, but if I picked two I liked, I’d have a better chance at wearing one that others didn’t have.  Then, at Jerry’s family Christmas, his niece unwrapped a couple presents- the exact same two fragrances I had just picked!

I was convinced that, just to prove a point that I shouldn’t have shopped a mainstream store, Jerry had told his mom or sister about my choices- but he hadn’t.  I didn’t care that they were the same, as she’s just one person- it was just so ironic, I mean what were the chances that out of every fragrance there, she would pick the exact same two…lol!  (Great minds think alike…?)  So, back they went to Sephora, and from then on, I decided I would try to pick more obscure fragrances.  The problem?  I started hoarding them.

Nothing wrong with being a fragrance collector, but I was spending a LOT of money on things I would be unlikely to use up, considering how many I was buying.  So, I did some research and found a few sites that sell decants of various fragrances, so you don’t have to buy the full bottle.  Granted, you get generic, boring little tubes or plastic containers, but the experimentation factor made it worth it.

Then… along came Scentbird!  Scentbird is a monthly fragrance subscription (you can also do a one-time purchase) where you get a month’s worth of fragrance each, well, month.  A month-to-month subscription is just $14.95 per month, shipping is free, and you can cancel any time.  The price is even lower if you do more than one month at a time.

Each month, you get a 0.27 oz., spray vial, which is the size of a rollerball.  With your first shipment, you get a sleek atomizer case, along with a new one in a different color every sixth shipment.  This is really neat, because I feel like I can stash it in my handbag, and still feel fab pulling it out in front of others.  It looks so much more lux than the vials and atomizers from other services I’ve tried.

Scentbird is super easy to use- just sign up and pick out your first fragrance.  If you’re not happy, you can cancel- but I’m willing to bet you won’t!  You can start adding other fragrances you want to your queue, and if you want something different or change your mind, you can change your queue.  Many of the fragrances are also available in full retail sizes at discounted prices.  If you love a month, you can order the full size for cheaper than elsewhere.

Now, since I love you all SO much, and at just $14.95, I can get so many more scents, I’ll go ahead and tell you that I got Juliette Has a Gun Lady Vengeance.  I’ve tried others from the brand, such as Not a Perfume (it’s Ambrox), and have been quite pleased.  Lady Vengeance has a lot of great notes, but I’d heard it’s lighter, without the heavy sillage.  So, I’ve really been wanting to try it for day time wear.

I was SO glad I got to try this, I fell in love!  Strange thing is that when I was reading reviews from other Scentbird subscribers, many of them thought it was too strong, when I thought it was lighter, like others have said.  This just goes to show how personal fragrances are, and how they can wear so much differently on each person.  This makes Scentbird the PERFECT choice.

I do my best to tell both the negatives and positives in doing a review. But, I honestly couldn’t think of any negatives with Scentbird.  I guess the only thing that could make it better would be if it were free.  Well, actually- you CAN get a free fragrance- if you sign up, and a friend signs up, you each get a freebie!

It just doesn’t get any better than this, guys and gals.  Large selection of authentic fragrances, a fabulously sleek container, just $14.95 a month with free shipping and ability to cancel any time, you can change your queue whenever you want… I mean, seriously, what’s not to love?

Don’t waste any more time, go to Scentbird.com NOW and see what all they’ve got!

Scentbird subscribers receive a free case as a gift, a $12.95 value, in their 7th subscription month! 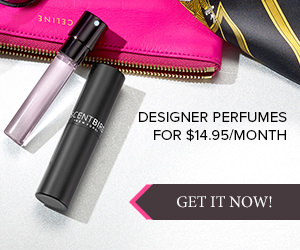